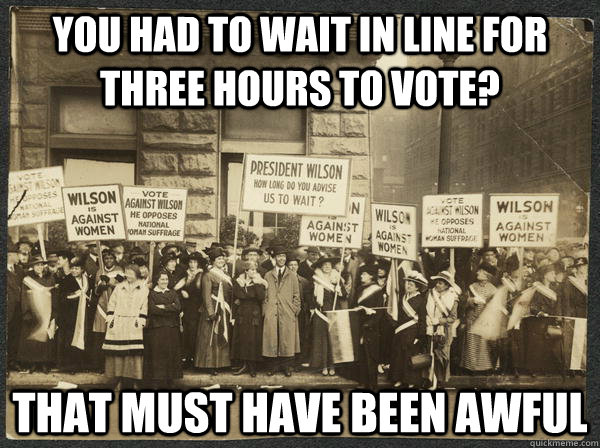 A friend of mine asked me to respond to this reaction she had shortly after the recent election:

Memo to all the women who say stop protesting/whining/crying about the election, you only have that right because better women than you did whine/cry and protest

What does my friend want? She wants women to understand that the privilege of even having an opinion, let alone freely expressing it, was won by women and woke men fighting for it; and she wants it now. My friend is frustrated that there are some women do not understand the irony in decrying the very vehicle of change (social activism) that allows them to complain about those exercising their rights; that if it were not for the protections towards expressions of free speech such as protesting, women may not have raised awareness and support for the right to vote.

That is it, the end. Easy-peasy. Except there is a lot of nuance and subtext in those sentiments. If you are satisfied with the above response, skip down to the last paragraph, the meat of this reads like a term paper. It’s a think piece ya’ll!

First, let us start with the obvious, the 19th Amendment itself:

“The right of citizens of the United States to vote shall not be denied or abridged by the United States or by any State on account of sex. Congress shall have the power to enforce this article by appropriate legislation.”

Second, a brief history lesson of the amendment:

What would eventually become the 19th Amendment was first introduced in 1878 by Senator Aaron A. Sargent (R-CA). The 19th Amendment was introduced every subsequent year until it was passed by Congress on June 4, 1919, and ratified by the states on August 18, 1920. That’s right, women have only had the right to vote in federal elections* in this country for 96 years. The 19th Amendment overruled a Supreme Court ruling (Minor v. Happersett, 88 U.S. 162 (1875)) that specifically stated that women were not included in the 14th Amendment’s “Privileges and Immunities” clause. This case originated out of Missouri in 1872 when Virginia Minor (suffrage leader) attempted to register to vote. Chief Justice Waite penned the UNANIMOUS opinion of the court:

“If suffrage was one of these privileges or immunities, why amend the Constitution to prevent its being denied on account of race, &c.? Nothing is more evident than that the greater must include the less, and if all were already protected why go through with the form of amending the Constitution to protect a part?” (88 U.S. at 175)

So basically, women are citizens, but because the Constitution does not affirmatively provide or abridge a woman’s the right to vote, too bad so sad.

Third, and perhaps most importantly, the Women’s/Universal Suffrage Movement needs to be contextualized:

A lot of us may be operating under the public school version of the Woman’s/Universal Suffrage Movement. That version goes a little something like this: women’s rights activists split from the abolitionist movement when the 14th and 15th Amendments did not discount gender as a pre-qualification to vote; a meeting was held in Seneca Falls, the Declaration of Sentiments were published; the movement [apparently] took a break for the Civil War and Reconstruction; there were some marches, and eventually the 19th Amendment was passed. Something I don’t think we do enough of is try and understand the zeitgeist of the era history occurred in.

If it was affordable, the industrial revolution freed up a woman’s day (meaning she didn’t have to do everything by hand from scratch). Once women had more free time, they started thinking (oh no!), and taking up interests outside the home (double merde), usually at church (oh, that’s ok then).  This often translated to an increase in charity work or activism for a cause, an example of this would be the Temperance Movement. Hey you know who was a Temperance worker? Susan B. Anthony. Once women are outside the house getting all socially active and trying to fix things, they start to realize ‘hey I can really make a difference, I can affect change in the world around me. If only my voice had weight…hey if I had the right to vote, it would mean my opinion matters, and my representatives would be representing me and my interests and not just those of men. I should register to vote.’ But what happens? The patriarchy. Well, not entirely, the notion of suffrage for women was controversial when proposed to the women at Seneca Falls. Why? Because most women accepted that they were dependent on men, possessed no decision-making power in the ‘real’ world, and believed it when told they were not qualified to do so. We will not get into the chicken (women’s role in society) and egg (the patriarchy) argument here today.

Still third, because the country was emerging from the last shift in social conscience (i.e., Abolition and the Civil War), additional progressive movements attempting to initiate a paradigm shift, probably weren’t welcome with open arms. We are going to examine some of the activities that women took part in to forward the notion that women are independent citizens capable of making our own decisions, thus equally deserving the right to vote, and the consequences for those activities. So, what exactly transpired between the Seneca Falls Convention in 1848 to 1919?

Here is where I would like to draw your attention that the advent/rise of the flapper girl, the first iteration of a woman with ‘modern’ American values, is coterminous with women’s franchise. Wait you mean there is a direct correlation between getting the vote and feeling independent and empowered over your own damn self? Yes, that is exactly what I am saying.

Finally, the takeaway here is that the lessons of the Women’s/Universal Suffrage Movement should not be forgotten. It was a very long road, it led to a paradigm shift in American culture and society regarding the role of women (not all women as the Civil Rights Movement will illustrate), and without the personal sacrifices of the women who fought for the benefit of all can you imagine what world would be like if it never happened? Would Hillary Clinton’s 1995 declaration that ‘it is no longer acceptable to discuss women’s rights as separate from human rights’ have fallen on deaf ears if America continued to drag its feet on gender equality? Luckily, we will never know. Once women received Universal suffrage, women began to seek and attain leadership roles. Women began to affect change on larger scales, women got a seat at the table (women of color have an additional layer of struggles). This was all possible because our foremothers assembled, organized, and sacrificed. The least we can do to honor their memory, is respect the right of those who disagree with the state of our country. Literally the least. Did the 19th Amendment solve all problems for women kind? You damn well know it didn’t. We should not let the privilege we have of expecting universal suffrage let us forget that a major legacy of this nation’s founding is civil disobedience; to call it whining borders on un-American.

**Ahem…Wyoming’s three (3) electoral votes will go to him, as he received 70% of the votes.

Because I am a nerd, here are some additional resources: