I remember when I first came to the conclusion that I am a crappy friend.

It was during that all-consuming first year of law school that I blocked the outside world. Life was attending class, reading, studying, making outlines and trying not to get lost in the misery of all of the above.

Certainly, I made new law school friends, but it was difficult for me to make time for any other friends who were not conveniently at school with me. In my defense, this observation is made in hindsight and was not intentional, but that doesn’t really make it better, does it? An unintentional @$$hole is still an @$$hole.

Well, if you think I was terrible then, perhaps I am beyond redemption now – in motherhood.

In all candor, my friendships are relegated to text messages and likes or comments on social media. I talk to my closest friends once a quarter, only on my work commute, if I’m being generous. I accept Evites and invitations because I really do want to go, but often end up sending a gift or last minute regrets instead because of #momguilt or a case of “I’m-so-F-ing-exhausted-that-the-thought-of-putting-real-clothes-on-is-too-much.” And get this, I’ve been texting with a friend since May 15, trying to schedule a run together….(Thank goodness she is also a mom)

Over the past month and a half, it’s gotten worse. I don’t want to blame it on being a mom (because I really do love being O’s mom), but the facts don’t lie. Once O turned 1, and we put her in daycare, this Type-A, ultra-responsive emailer/texter has completely fallen off.

Why has the past month and a half been especially difficult, you ask? Because we went from O never being sick to being sick every other week (enter rant about paying for daycare even if your daughter doesn’t attend for weeks).

The collateral damage? I just responded to a text to a friend’s daughter seeking career advice yesterday, when she sent me a text on October 10! I have yet to send thank you cards to my fellow Sisters-in-Law blog-hers for their gift to O almost TWO MONTHS AGO. I texted a friend before her birthday to plan a birthday dinner, and I’m pretty sure I forgot the actual day of (Sorry Puja). Oh! I forgot my anniversary because O got RSV – and it wasn’t until I got a sweet text from a friend, wishing me a happy anniversary (Thanks Carling!).

While I want to offer a global apology to all my friends (including my spouse) for being absent or negligent, I don’t think I should, if I don’t have the resources to invest in being a better friend. An apology without a commitment to change is such an @$$hole move.

So instead, in light of the most recent holiday past, I simply want to say thank you.

I am immensely humbled and grateful for the loyal and VERY forgiving friends I have in my life, and I hope that as I get better at this Mom-thing, I can be a better friend.

Your Worst Friend Ever 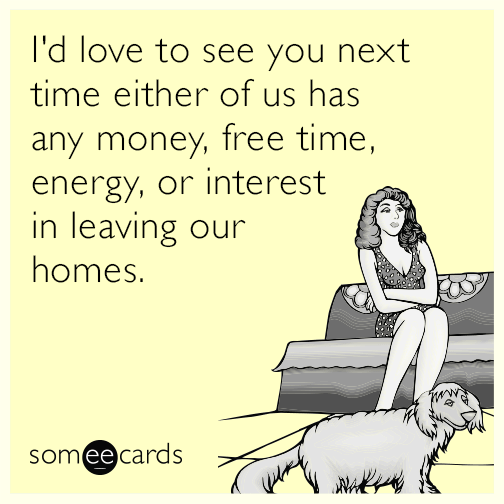