[Editor’s Note: Today’s Guest Blogger came to us by way of her facebook status on September 25th. It is reprinted here with her permission.]

I’m an INTP. If you don’t know what that means, just google the MBTI personality types. Whether the Meyers-Briggs is junk science, I really don’t know (and frankly don’t care). Ironic for my personality type, I know. But I’ve found it to be pretty spot on for me, so I’m running with it.

You might ask, what does any of that have to do with the flag protests?

Well, people like me don’t tend to have much patience or tolerance for highly emotional and illogical arguments (or people, for that matter). We also have a tendency to reserve our opinions and thoughts for those who we know can “handle” them.

That being said, I’m going to wade into these shark-infested waters and try to do so “nicely” because I’m truly concerned about the stability of our country.

I’m not trying to be an alarmist. But I also don’t say this casually (and likely not for the reasons you’d think).

See, I couldn’t give a rat’s behind about the country being deeply divided or there being vigorous debate right now. Anyone who’s studied this country’s political history can tell you that the nation has ALWAYS been deeply divided about something. Some would argue, me included, that it’s actually healthy to have disparately different voices and opinions fighting to shape our laws. Heck, the Federalists and Anti-Federalists were deeply divided over the very structure of our government. But the reason why we have a Constitution and a nation today is because both sides were able to cogently articulate the logic behind their thoughts and reach a compromise.

So the problem, as I see it, isn’t that the nation is deeply divided. The problem is that we no longer know how to reason with each other. And why can’t we reason with each other? From what I’ve observed, a great part of that is rooted in the fact that most folks seem to lack both a basic understanding of civics and the ability to think logically.

Thomas Jefferson understood this and deeply feared what it would mean for the stability of the country if the electorate were ignorant. He once wrote:

Like Jefferson, I truly believe that ignorance is anything but bliss. In fact, ignorance can be downright fatal to our civil liberties because an uninformed electorate will easily fall for propaganda and willingly give up liberty for tyranny, all in the name of perceived patriotism.

So let’s take this back to the flag protests.

I’ve seen so many folks posting about how the failure to salute the flag or stand for the anthem is somehow disrespectful to the military. Their reasoning being that the military fights for the flag. And that’s where it takes every fiber of my being to not holler out Bullsh**.

Again, it’s not for the reasons you might think. I have absolutely no doubt that a great many service members and vets who died while serving the country very proudly stand/stood under the banner of the flag. I also don’t doubt that some people do equate the flag with our veterans. Whether I agree with that equivalence is another story. So yes, there is an allegiance to the flag.

But it makes no sense to say that they fight for the flag. They don’t. If they were fighting just for that piece of fabric, any despot could cloak himself under the banner of the flag and the military would gladly go running at that person’s beck and call. If you seriously believe that the allegiance is just to the flag itself, then you’d have no problem with the military doing the bidding of Kim Jung Un if we somehow found ourselves in a place where all of the flags were taken from America and somehow under the control of N. Korea.

You see how preposterous that is?

This is where basic civics and just a little bit of reasoning come into play.

The flag is merely a symbol. And a symbol is nothing without its underlying meaning. In the case of the flag, it symbolizes the ideals of our nation. And what are the nation’s ideals? You can find them embodied in the Declaration of Independence, the Bill of Rights, and the rest of the Constitution. And I can pretty much guarantee that if you spend just a little bit of time in those docs, you’ll see that the founders wouldn’t have come close to endorsing forced displays of allegiance.

If we really want to be technical about it, the pledge of allegiance was written by a socialist. Yes, it’s true and easily verifiable. Look it up if you don’t believe me.

But sit that aside for a moment and let’s examine the words we say when we pledge allegiance to the flag. You’re pledging allegiance to the republic that the flag represents. That republic is supposed to be a nation that is “indivisible, with liberty and justice for all.”

Let those words sink in.

If you’re truly giving your allegiance to a country committed to liberty and justice for everyone, then you’d recognize and respect the freedom of your neighbors to exercise their constitutional rights. Remember that old saying, “I may not agree with what you say, but I’ll defend to the death your right to say it”? Well, it didn’t come from nowhere.

You’d also recognize that the flag is just a piece of fabric waving in the wind if the nation isn’t committed to providing equal justice for all.

So please spare us your faux indignation over the flag protests. Attempting to force displays of patriotism while turning a blind eye to injustice are far more disrespectful to the soldiers who fought and died for those rights. In fact, I’d argue that the person taking a knee to push America closer to achieving those ideals is far more patriotic than someone who’d attempt to strip others of their rights.” 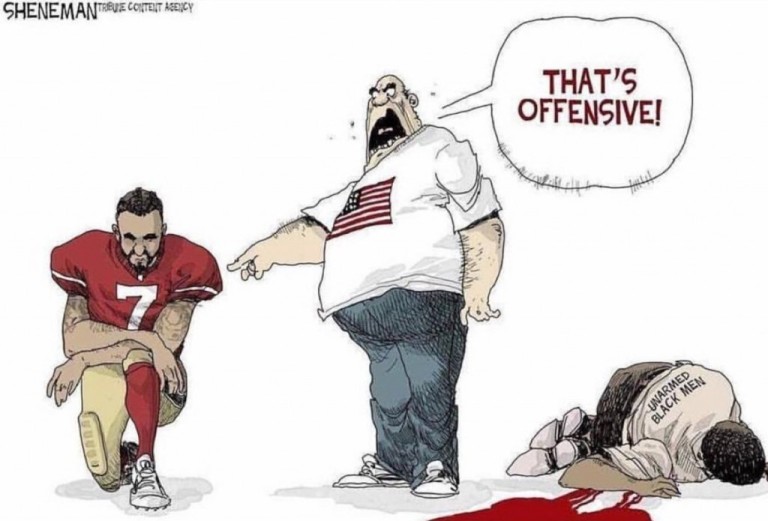