“How is O sleeping?”

Thankfully, I don’t get this question much anymore now that O is 1. I HATE getting this innocuous yet frequently asked question.

Don’t get me wrong. I know it’s a very relevant question for new parents – and frankly, it’s an easy way to connect with other parents because we all get that the struggle is real. The journey from an infant sleeping 2 hours at a time to an entire night can be a long one – and once you get there, it truly feels like #winning.

The reason why I hate the question is because of my truthful response, where I instantly out myself as a failure of a parent.

I don’t know why I feel like it is so shameful, but there it is, out in the open:

To make my confession worse, most of the time it is without the hubs in it, who is often relegated downstairs to the living room couch (out of choice – because he doesn’t sleep well with her in it).

And if you’re wondering, I’m that wife. (Co-sleeping is great for marriage said no one ever).

The honest truth? I am not sure how we got here.

The first couple of months were predictable – O woke up every two hours hangry as hell, and for convenience, she was in a Halo bassinest next to the bed. Then magic appeared right before Christmas in the form of a Dockatot – which we used against recommendations in the bassinet – and O started sleeping 6-8 hours. Might I add that she was just shy of 3 months here? #badassmom right?

The rest is kinda foggy. If I were to take a guess, I think co-sleeping started when she was between 6-7 months when she outgrew our setup. She also started a developmental phase where she started crying when she didn’t see us. Maybe it could have been attributed to when we went to vacation and we co-slept all week in the hotel because I didn’t trust the janky hotel crib that looked like a rolling mini-prison. And throw in some #momguilt when I started having to travel for work. I also may or may not be the weakest link when she cries.

I’ve tried to justify it…..

Perhaps the shame in co-sleeping is only cultural. After all, my parents did it – and we turned out fine. I think it’s totally normal in other countries. Perhaps this promotes more mother/child bonding. (I have to confess that I do love the smell of her head and feeling her little feet and rubbing her back to soothe her in the night).

Hopefully, O will let me know when she’s a big girl and ready for her own bed.

Hopefully, I’ll be ready too. 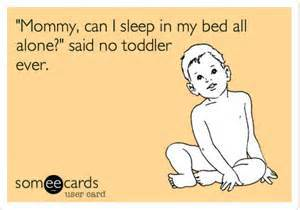