Shortly after the writing on the wall became clear last night and Secretary Clinton would not win the American presidency, I posted this to my personal Facebook page: 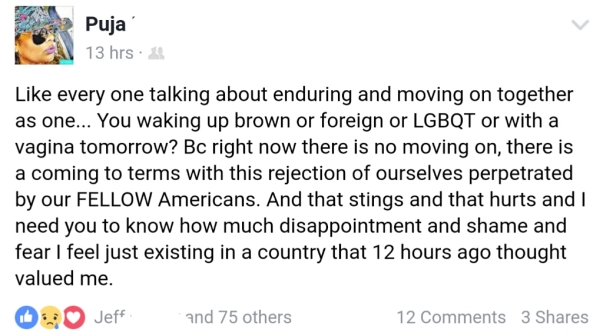 The comments I got were a mix of ‘yup’ and ‘we have to unite and keep fighting.’ While it is ultimately true that divided we fall, members of the groups of people who the GOP allowed to be marginalized over the last 15 months need a minute. We were already divided out. We need a second to comprehend what the hell we just witnessed. The country by the slimmest of margins elected an authoritarian populist whose name alone caused world markets to nose dive. HOW? Didn’t we hear what he said? Didn’t we read that his actual business records and dealings were not as ‘great’ he claimed?  Didn’t CNN and NY Times (eventually) cover the all the absolutely hateful and antipathy laced words uttered by this human and proved them to be lies and falsehoods? Yet something prevented people from supporting a life-long dedicated public servant with oh so much experience and credentials. Something allowed people to focus on a stack of emails and forget the forest of actual crimes committed by the other candidate. Something led almost half of all voters to choose hate (despite the popular vote win, look at the margin, it is too slim for comfort). So while we are stronger together, because it is only together we can effectively stand against our foes (his orangeness, not the conservatives as a whole…although toeing that line), we need a damn minute. By “we” I mean anyone felt marginalized by orange face and the GOP this election cycle. What other reaction should we have when numbers and stats, exit polls, and twitter eggs tell us the orange one was chosen for reasons that benefitted a certain group of people at the expense of literally EVERYONE ELSE? I have dubbed this the fear of 2044 phenomenon.

2044 is the year that minorities as a whole will become the majority of people in the US, among US children that year is 2020.  People have from time to time been known to vote based on fear. Fear of not having the Supreme Court stacked to think the way high dollar campaign donors need them to? I concede that the ‘silent majority’ felt marginalized by the system and ignored and wanted change. But all you ended up doing was shifting the feelings of disenfranchisement to another group so that your woes could be fixed. So that your desires of no immigrants, of closed borders, of having to make health care decisions for everyone with your holy books while simultaneously degrading the religious beliefs of others, and sentenced millions of Americans to death or the poor house for your belief that the Affordable Care Act is worthless were put above the needs of the NATION. And you GOP members who didn’t distance yourself or left your endorsement hanging out there, for caring about being in office than the reasons you are in office (hello, representative government???), you are the worst. What have you wrought upon us? How are you going to work with a man so toxic? Or was he just a puppet in the first place? Thanks for in one fell swoop making the greatest democracy in the world comparable to Hitler’s Germany. Thanks. That isn’t the America I thought we were living in, let alone had the potential to exist.

We need a minute because we thought we all agreed that all that noise, mudslinging and distractions of this campaign would be counteracted if we just did what was right. But how is hate right? Do you people who voted for Trump realize you have just set precedent? You didn’t shake things up, you didn’t break down the establishment, you just said it is ok for candidates to behave like this now and forevermore when the presidency is on the line. So now to openly taunt, ridicule, and physically attack our LGBQT, differently abled, Muslim brothers and sisters (among anyone else who is anti-trump) is accepted. How far away are we from stonings and lynchings? Thanks for many more futures of this.

We need a minute because for the last eight years we watched this man and his gaggle of followers demean the Obamas with something more than just anti-policy rhetoric. Surely an educated, well-spoken, do-gooder, collaborative man as Barry Obama is not of America. Because America doesn’t allow Black men to be that. That is what the birther movement translated to. Sorry, this highly qualified Black man cannot be our President because he obvisouly wasn’t born in America, we don’t make natural born Black sons like that here. That insidious unspoken leitmotif of the birther movement solidifies and moves to the forefront now. His orangeness was so mean and pigheaded about his hate and he won. Now these policies are re-woven back into the fabric of an America so ashamed of its past that slavery is taught as a business exchange? Isn’t that called regression? We owed the Obamas more than this as their legacy. We need a damn minute because this vote is telling us that the history that President Obama made was seen as a ‘social experiment’ and the 2016 election signals it is over. America can go back to the days when it was great. That is the biggest farce about this election, America has never been great for everyone at the same time. Look at the seedling Black Lives Matter movement. We were finally moving into the social justice reform portion of civil rights and come January 18, 2017 what strides we made there are in jeopardy. Because change, true change is under threat of being dismantled while the patriarchy rebuilds their institutions. We need a minute because the concept of liberty and justice for all is being called into question.

We need a minute because women and little girls (and woke men) saw the hope that the glass ceiling was about to be shattered in the most tangible way, of the thought that women no longer have to be daughters or first lady to occupy the white house, that girls truly can do anything were just slapped in the face. Hard. All my friends with daughters cried when they looked at their young children today and had to tell them a bully won; That ideals, working together, and being decision makers are things America doesn’t want you to participate in. Sure some see it as the denouncing of a ‘crooked candidate’ (le sigh) but she also represented something, just as the orange demagogue represents something. She represented what was supposed to be the apex of a journey of woman kind. The change from being told that a woman’s place is in the home to a woman running the home of the free and the land of the brave was all encapsulated by this candidate more than any other female candidate who ran for President. Instead this result feels like the nadir of American feminism. Yes, I am a member of Pantsuit Nation, and yes yesterday was super emotional to scroll through that feed and watch men, women, and children donning pantsuits, or wearing white, or leaving “I voted” stickers on Ida B. Wells and Susan B. Anthony’s gravestones yesterday. They stood in lines to do this, to honor the sacrifice and mark the occasion of casting a vote for the first female President. I cried buckets thinking of Hillary’s commitment to 50% of her cabinet being women, and now I am crying buckets for those women who confessed that their partners looked them in the face and told them they didn’t vote blue, they voted orange. Pussies will continue to be grabbed, that is our reward for voting for men like the orangesicle, that behavior is normalized. We have to look little girls in the face and say sorry, the world we thought we were building a world where you are not seen because of your sexual potential or rated on your attractiveness doesn’t exist. Turns out that is not a thing we can do for you right now; You will continue to bump your head on a reinforced glass ceiling.

We need a minute to regroup.

But I promise you that once that minute is over, we are ready to right this. We the people who chose the candidate that represented progressivism (or just chose the one that didn’t embody hate) are far from done. Because this is our country too, and despite what some may want us to think, America will embrace 2044. I have seen people already organizing to become activists, to donate to the ACLU, Planned Parenthood, etc., and becoming more engaged. America will sew a fabric of ideals and morals so strong that an over ripe orange will not be able to tear it apart so easily. Ever Again.

We are stronger together, but we still need a minute.

Things Keeping Me Sane This Week: This quote from HRC’s emotionally fraught concession speech this morning:

“To all the little girls who are watching this, NEVER doubt that you are valuable and powerful, and deserving of EVERY chance and opportunity in the world to pursue and achieve YOUR own dreams.” – Hillary Rodham Clinton

*Capitalization is my own.