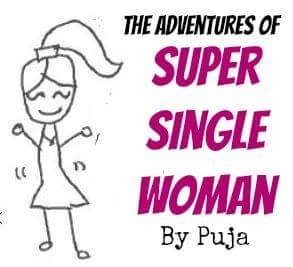 Why hello there friends. It is time to check in on our heroine. If you will remember, the last time we met up with her, she was practicing “the rules” as given to her via Svengali, her new lifestyle advisor. After practicing for a while, the Super Single Woman found herself in a rut. “The Blerghs” can best be described as the state of being in which you find yourself ‘sighing’ a lot. Sighing because #Adulting has got you down. Sighing because even though you are trying not to be, you are still #SingleAF. Sighing because your everyday routines (Work → Gym → Home, repeat) could use some shaking up. Just in general sighing because you realize you have the power to change things, but maybe lacking the courage? I don’t know, that is how the Super Single Woman described “The Blerghs.” So what does she do? Read on to find out.

Editor’s Note: In case the below is too small, you can read a larger version here: ssw-ch-4

Well that is one way to shake things up.

Making a decision seems to be the moral here. Make a decision to change your life and then stick to it when confronted with an opportunity to do so. Let’s go with that. What if Super Single Woman had said no to the adventure that got her out of “The Blerghs?” Not all decisions have to be this sexy. Think about The Year of Yes by Shonda Rhimes. Because she realized her life was filled by saying “no,” Rhimes challenged herlself to ALWAYS say “Yes” for an entire year. Sure she said “yes” to speaking in public, to loving herself, to spending more time with family…and the Super Single Woman said “Yup” to a ménage a trois, but the message is the same:

You can start saying “Yes” to life, when you are tired of “the Blerghs.”

What adventure awaits our heroine next? Will the author find a drawing style she likes and stick to it? Answers to these, and other pressing concerns, are sure to be in Chapter 5: “The Earthquake.”

Things Keeping Me Sane This Week: OK have you seen Running Man? It is a South Korean variety show that is REALLY big in other parts of the world except the United States. The premise is simple, achieve the goal the producers have given you, while avoiding several obstacles, winning games, or outwitting your opponents. There are seven South Korean television and music celebrities who are forced to do interesting challenges (think field day meets Double Dare) to avoid penalty or win a reward. They each have their own ‘character’ to play (like all reality shows), but these characters are different than what we are used to. Instead of ‘shrill woman’ or ‘naïve fool about to get a reality check,’ we have  characters such as ‘The Tiger’ ‘king big nose,’ ‘the goddess for fortune,’ ‘the betrayer’s club.’ It is mindless fun, but it makes me laugh so it keeps me sane, and sometimes other celebrities plugging their projects are guests and what is better than seeing that delicate actress attempt to jump over a pommel horse into a vat of jello? See, sounds intriguing doesn’t it? Ok here is a link.