You all knew it was coming right? We were going to do a review of Harry Potter and the Cursed Child. Specifically, I was going to because Harry Potter is my fandom. My main fandom, I like other stuff, for the record I like things other than Harry Potter…

As a quick reminder, the West End play Harry Potter and the Cursed Child opened on July 30, 2016, and the script (in play format) was released as a book the same day. That’s right, in 2016 we got blessed with an 8th book in the canon! The book has a photograph of a kid in a nest, and the hardbound copy is in Hufflepuff colors, black and yellow. Ironic, because like the members of Hufflepuff House, this book tries really hard.

I am honestly torn as to whether I like this addition to the Potterverse or not. On the one hand, this story is complex and filled with subtle nods to those who are invested in Harry Potter, and it makes it a fun read. It is what it is, a post-script slice of life of our gang twenty years after we last saw them. On the other hand, is it the right chapter of Harry’s life we should revisit? I really wanted to see “Harry Potter and the Psychiatrists’ Couch” because our friends needed therapy after what they went through. I needed therapy after what they went through.

This is your only warning that spoliers are ahead. 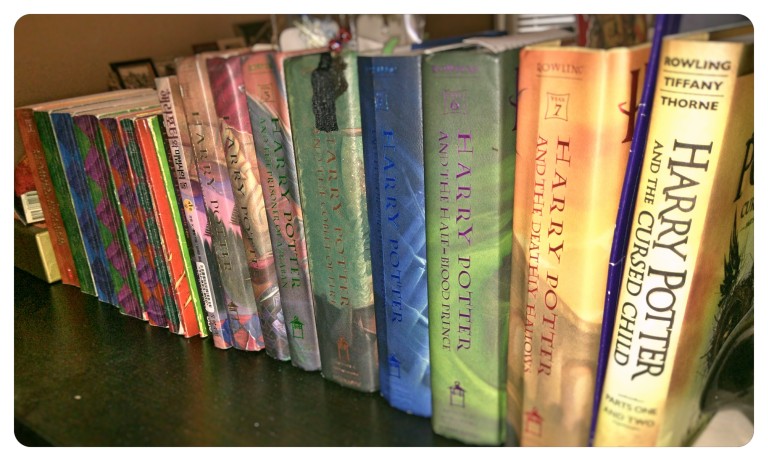 Basic premise of this book: Harry Potter named his middle son Albus Severus Potter after his substitute father figure and the bravest man he ever knew, in that order. Albus starts Hogwarts estranged from his father, becomes best friends with Scorpius Malfoy,  is sorted into Slytherin House, and we flash forward four years from the sorting in the next scene. Already in his fourth year, Albus and Harry do not see eye to eye, Ginny knows why, but waits until the last minute to clue either of them in. Plans are hatched, prophetic dreams are had, birth secrets are revealed, Ron only makes appearances to play the buffoon, and our newly expanded Scooby-gang saves the day.

I am not going to go through the entire plot here because I encourage reading (ha ha suckers). But the gist is this: Angsty Albus doesn’t want to be the Great Harry Potter’s son. So he and Scorpius steal a time turner from the Minister for Magic’s office (you need to know that Hermione Granger-Weasley is the Minister for Magic – at the age of 40), go back in time and save Cedric Diggory from being killed in the TriWizard Tournament. For some reason, this made sense when reading, two teenagers living in the shadow of their father’s legacies will do crazy things to prove themselves I guess. Describing it to you now, it sounds weak and lame. Well Albus and Scorpius eff shit up terribly. It’s a mess. But because it is a Harry Potter story, it is resolved in the end with some epic magic and a fair amount of heartbreak.

Albus is angsty, at one point my reading notes say “this should have been called Harry Potter and the Emo Middle Child.” Albus becomes BFF with Scorpius Malfoy early on. I KNOW! But it is OK because Scorpius turns out to be a combination of original book version of Ron (he has some great lines to deliver) and Hermione (the part where they both simultaneously confirm information from Hogwarts, A History, made my fangirl heart smile). So they try to recreate the dynamics of the original trio with a duo, it’s different but the same. Which may be a good sub-heading for this review: Everything is Different, But the Same.

There are some really good things in this play. The first is that Hermione is the Minister for Magic and remains relatively awesome (but there are problems with Hermione, this article nails them on the head). The second is that Draco Malfoy has been humanized, his son truly is adorbs, and while I can’t forgive Draco for being a racist (as a child and teenager), he does start to redeem himself. Third, the plot makes sense in terms of what Albus and Scorpius have to do to fix their mistakes, and finally, and most importantly, the theme that life is not predestined, and we control our destinies is at the forefront (as opposed to its previous station as a subtle leitmotif throughout ). See the same, but different.

To me, it is clear what JK Rowling wrote and what the other playwrights worked on. I described reading this play to a friend as if only aware of seeing the profiles of the characters while your eyes are unknowingly covered by saranwrap.  I am aware that some of that is my fault, these characters are now 40 not 17, it is a code switch to be cognizant of as you read. They are authority figures, they are the ones in charge, the ones who people call when they need solutions. Which OK I guess if I can believe that magic exists, I can believe that Ginny and Harry can barge into the Slytherin dormitories late at night to search for their son because that is the behavior of distraught parents, not impetuous teenagers. I can hear some of you say, well Molly and Arthur never did that; but Dumbledore was alive then, everyone trusted Dumbledore. Poor Minerva she is treated so lightly in this book. So it is the familiar in an unfamiliar situation (the profile view) plus the fact that you are learning about them in their new reality, which makes you realize that you do not know them as well as you thought you did (the saranwrap). Again, different but the same.

I originally had this reason in the con’s paragraph, but upon further reflection, it is a pro: The Cursed Child does not have a big bad magical evil to defeat (well it does, but it is dealt with so deftly that it is clear it was not the main plot point to resolve), it is an encapsulated story about the human, the mundane (being a parent and freaking out about raising your kids), and the muggle side of things more than coping with magic and destiny.

Here are my problems with this play, it is clearly not solely written by JK Rowling, some of the passages are spot on Rowling and may have been lifted from the short story she wrote that inspired this play. I am not sure how big a fan Jack Thorne or John Tiffany are, but parts of this are written as if someone who thinks they know the characters tried to write them (ex: an OPENLY WEEPING DUMBLEDORE, Ron is little more than comedic relief). The characters felt foreign to me; we sacrifice character development of the newer characters to give familiar characters stage time (some written with broad strokes – Ron. I am specifically talking about Ron) to expand on pre-existing ethos and pathos. One of the things I love about the previous Harry Potter source material is that they seem timeless. Meaning you can plop  the characters down in any time after a television was invented, and you can’t tell what time period the book is referring to. The outside world never intrudes on the story; the themes of good over evil being timeless and all that.

In Cursed Child, Scorpius and Albus read very loudly and clearly as millennials. I mean great you captured the zeitgeist of the times, but can’t that be achieved with ad libs from the actors? Also, was this purposeful? Was the tone of millenialism supposed to seep through? Am I supposed to take this information and draw the conclusion that Hermione Jean Granger-Weasley as Minister for Magic, ushered in a new time of muggle/wizard cooperation so much so that muggle mannerisms have pervaded wizarding culture? Am I? Or is that being an apologist for the failings of this play to keep things timeless?

The story felt rushed, but that could be a result of the format. A play is great, it is unique, it would mean Harry Potter is part of every realm of entertainment, but is it conducive to telling a story that is as rich and informed as we are used to with the other books in the series?  Not so much no. A play is made great by wonderful dialogue, this play does not have that. Did Rowling get to give a final pass on the script to fix things? It doesn’t feel like she did. The play also relies a lot on pre-existing knowledge of the Potterverse, it could be hard for a casual fan to understand why when Draco says he doesn’t mind being bossed around by Hermione it is a big deal. Essentially, the play cannot stand on its own, which no big thing, it was written for fans anyway, we get what is being put down (for the most part). It is worth the read, despite what these paragraphs may have you believe.

Instead of me going through each plot point, I am going to give you a reaction chart to the things that happen in this book (I took four pages of notes while reading). For your convenience refer to the citation to see if we had the same reaction to the action/revelation/ish that pops off. Click Here to download the Cursed Child reaction guide.

I know you have opinions, comment here or on the facebook page if you want to share your thoughts on [this and all things] Harry Potter.

Thing Keeping Me Sane This Week: A few things, the first is Harry Potter Trivia is tomorrow, I think I have recruited enough people for a solid team. I am excited. Also, shout out to my brother who is joining the 3-0 club this week. Love you buddy. Finally, my penpal (the wonderful Hermioneela) started a group club at her school called S.P.E.W (The Society for the Promotion of Elementary Writers). For several reasons this keeps me sane, the first being that there are great kids striving to do great things among us; the second is that it is the best homage to JK Rowling and Harry Potter love to name a writing club after a beloved acronym from the series. Finally, I got an official S.P.E.W badge from my wonderful penpal. Congrats to her being the change she wants to see in the world.