This year’s Oscars brought up an important point but I thought, is that only true for this one minority group and does it spread beyond cinema? So I take a step further. March is Women’s History Month so I began to think about the numerous issues faced by women. We’ve been underpaid, undervalued and under-represented in almost everything for years Unfortunately, it’s a constant battle most of us fight everyday. It’s called feminism but after years of fighting, why do women still lack the equality we rightfully deserve?

Outside of men vs. women, just think of how many minority groups we have today other than what was highlighted at the Oscars: groups based on race, culture, religion, sexual orientation, wealth, education, physical disabilities, mental disabilities, and the list goes on. As a 1st generation born American with parents who were born/raised in Africa and grandparents born/raised in India, I ask, where do I fit in? Which box do I check? People still ask me “no, where are you really from” and my response usually raises more eyebrows and questions. What are we going to do now that our new generation will be multi-racial and cultural? Where does that leave the definition of a true ‘minority?’ Will it become a moot issue or will it just further complicate what we already struggle with?

I digress; let’s go back to the month of March and women. Even today, in 2016, after all we’ve achieved, women are still subject to legalized rape, honor killings, and physical discipline and defamation. Fortunately, there are courageous survivors and advocates like Malala Yousafzai, a Pakistani activist, who spread awareness and continue to educate the world on these unspeakable acts of violence. No where near the same level of inequality and disrespect, but even in the America, women face double standards. Women are still treated differently in terms of respect, promotion, salary, and family. Why am I called “sweetie” or “honey” while my male counter-part gets a hand shake or a “what’s up?” If I correct this, there’s an awkward pause, then I get a snarky comment and I become unfriendly, uptight or cranky. If a male puts his foot down, he’s a strong and respected man, but when a woman does, she’s a bitch, on that time of the month or just mean and unreasonable. Why the double standard? I deal with it everyday and to be honest I’m exhausted; it’s not like I had a choice in the matter. Then we question salary. Fortunately, government salaries follow a set schedule but I know many successful female professionals who constantly struggle to maintain the same competitive raises and promotions in the corporate world. Next is the expectation to balance a personal life along with a career. Mothers are expected to provide, nurture and love their families; be at every school and extracurricular event while also being at the beck and call (I checked, that’s how you say/spell it) to their careers.

*Shout out to the women (and single fathers) who balance both lives! God bless yall! 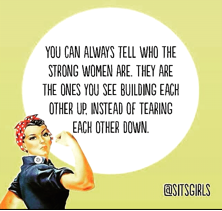 I could go on with issues regarding inequality in professional courtesy and respect based based solely on gender. Women are not only secretaries, interns, teachers, nurses, and stay at home mothers! We are also doctors, professors, inventors, astronauts, chefs, judges, and CEOs! So I ask, when will my genitalia not play a role in how I’m perceived and/or respected but when will I be recognized solely on my education, experience and accomplishments, nothing else? Maybe that’s why I aggressively steered away from the traditional female roles: wife, mother, caretaker, because I was trying to rebel and create a new persona.

We can blame culture, lack of education or a number of non-sensical factors, but I feel that ultimately society should be blamed. Hopefully as we evolve in all aspects of life, women will not only be valued and loved but the old stereotypes that still govern us will dissipate. No one can expect women to cook, clean, birth, nurture, raise kids, maintain and preserve family culture and religion AND pursue/succeed in a career. What happened to the union of marriage? 50/50? I always complained to my mom growing up, guys have it so easy. They don’t have to go through all the shit we have to: periods, liking boys when they don’t like girls, hair in places you can’t control, having to look pretty and smell good ALL the time, preserving culture and balancing the reputation of your family while boys can go off and do anything and still “just be boys.” Thankfully (after a lot of maturing) I can say that I am truly proud to be a woman, an Indian woman, especially this day in age. I admire so many, my mother who continues to pave my path, both my sisters, who fuel my passion, strength, and drive, along with countless friends and cousins, who are more powerful, courageous, and stronger than any man I know. Fearless and fierce and I am proud to be one of you! May this only encourage women out there to pursue your dream and never let this gender inequality prevent you from reaching your true destiny!