My story today is one of presidential politics-ish. Wait, wait, don’t leave yet. I said –ish. Today is Presidents Day. We celebrate George Washington (and oddly enough, depending on your state of domicile, other dead white guys as well).

The fella on the left is William Marbury; the one the right is James Madison. 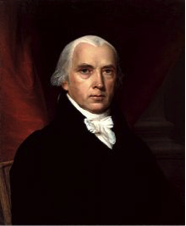 These two (2) handsome blokes are the heart and soul of the legal profession. Why? One sued the other of course. (Marbury v. Madison). 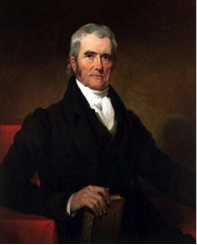 The above old bean was John Marshall. He calmly told them to hold their tits and he would take a peek. You see Marbury was a last minute appointment by an outgoing far left leaning John Adams. Marbury didn’t get his commission – it was late, I’m sure the quill was withered and the horse tired. Marbury said Madison failed to deliver it and said “HELLO, GIVE IT TO ME, BITCH”   Yep, that was the exact conversation. It was late, they were hangry and I’m sure one had a runner in his stocking. Emotions were high.

His most royal chief-ness Marshall (and that is his real title, I looked it up) decided that 1) failure to deliver the commission was bad, very bad*, but that 2) the law which allegedly told the Court to do something, was itself invalid and so it was proclaimed that Willie had the right to his scroll, but no one had to give it to him. Suck it Will.

(Side note: Marshall was the guy who was failed to deliver them all timely. He incorrectly assumed the next guy to hold his office would do it. Isn’t that typical? A man doesn’t finish his own effing job so he leaves it for someone else to do. This caused an entire other discussion of WTF was his royal chief-ness thinking by hearing this case?!)

Wait, what? Why does this matter?

The Supreme Court existed to settle disputes between states or between the federal government and a state. Here was Marshall invalidating a law between the President and Congress. He said the Constitution and the law were in conflict and he swore to uphold the Constitution first and any laws second. No one had ever done this. No one had ever told the President (all two (2) of them) or Congress they were wrong when it came to their business. The pendulum had been shifting wildly so they just kept enacting new laws which overrode each other. Here was a Court telling these Boy Georges (tee-hee) that while you duke it out, this Court watches over you (& he acknowledged they watched over him). BOOM. Mike drop and sashay away.

This was monumental because it established the power of the third branch of the government.

With the passing of a Justice over the weekend, it didn’t take but a moment for the Legislative and Executive branches to fire up their pitchforks about filling the spot. The angry rhetoric just reaffirms the need for an arbiter to step in and remind them the laws they create should not just protect their chosen half, but should aid the United States (meaning all states that are united). I look forward to the selection of a new justice, not because of the politics behind it (those are revolting), but because it means the Constitution is working.

Today we celebrate the first President and the others which have followed him. If you’re tired of elections which are suffocating your bandwidth or if you wonder if the President and Legislature will ever get along, they won’t. They never have, but there is a third branch with its own make-up and royal chief-ness. It exists to keep the other two on the straight and narrow.

One thought on “Marbury v. Madison”